Most people think January 1st is the time to start anew.  Not us teachers.  Fall is the beginning of the school year and it alerts us because Target starts carrying folders and Crayola Markers for ridiculously cheap prices.  Fall is a time where lists can be made and changes can occur naturally, just as the kids are getting onto the school bus.
I was asked by our local online Patch newspaper to blog for them.  It doesn't pay (booo...) but they want me as I am with my kind of writing.  I took this as an enormous compliment and an awesome challenge.  Plus, it could open up all sorts of opportunity for me once the littlest Picky heads to school (did I mention that potty-training is actually going ok?!).
Anyway, I come to you because I need your help.  What should I write about?  What blog posts did you favor?  I am really nervous and I'm not sure why; you, as my readers, are very important to me but I never looked at this more than an online journal that some people read.
So please help me!  And some good luck might be nice.
Posted by Amanda at 12:34 PM 4 comments:

The Three-Year Old Has His Own Vacation Plans.

If one person says or even thinks (because I will KNOW, dang it) that staying in a hotel with children is a luxury, I might punch them in the face.

Ok, maybe not really.  Mostly because I am not violent but because those who would say it, think it, judge it, just simply don't know or remember:  IT STINKS.

We travel with our children often and it usually goes really well.  Kids take turns picking movies, no fight there, and the littlest Picky overrules everybody else a midst a crying fit.  Kids have their spots, their snacks, their water bottles.  Life is good.  So off we go to Atlanta, Hilton Head, Northern Michigan and usually there are no problems in the car.


It's the hotel.  That's where the evil takes place.
My sweet, eccentric, routine-driven children turn into these picky monsters of insomnia, chaos and mischief.  They jump on beds, jump off the beds, hide in the drapes, run around, crouch under desks and while this is all happening, the littlest picky wanders the room screaming, running or trying to call everybody on the phone.  ("No, we did NOT call room service!").

We just got back from a wonderful trip to Great Wolf Lodge (so much fun) and I thought I had come up with the most brilliant plan.  Since this was the first time we didn't have to bring the pack 'n' play (a modern day-version of a cage...err...crib), I thought that spending a little extra money to get the "Wolf Den" room would be the way to go.  See, in the Wolf Den there are three beds.  A set of bunk beds and an extra bed...all in an area of its own.  Sure enough, it is magical.  The kids love it.  I only had to pull the littlest picky down one time.  And I made sure to catch him when he went through the Wolf Den's window headfirst.

Day ONE:  9:15pm.  Bedtime.  Kids look exhausted, the biggest Pickies find their spots and the littlest is WAY excited that he is sleeping in with his siblings.  And he moves.  And he talks.  And he screams.  And he flashes his light turtle around so the stars on the ceiling dance.  Oh he has a party.  Picky 1 falls asleep, but the middle guy is NOT pleased with the development.  Falls asleep anyway.  Finally after lots of singing, head-stroking and pat-pats, littlest Picky is down at 10:50pm.  WTH.  Bedtime at home is 8:00.  Thank goodness he's asleep. 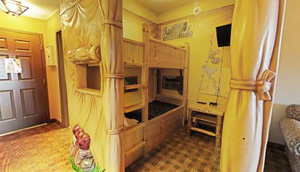 Day TWO:  8:00pm.  Decided to put the littlest Picky down while the big kids were out and about.  He was showing signs of surrender, so I sat and stroke his head and face, he yawned...and then he partied.  Jibber-jabbered up a storm, moving his little three-year old body around, he was not going to sleep.  Finally, I put the Wiggles movie in his bed, the big kids came home, watched the movie in their beds and all listened to the littlest Picky cry when the movie turned off because the laptop was overheating.  Finally, at 10:00pm, two hours after the initial attempt, the Pickies were asleep.

Waking up was better.  Just in time to go home.

So this is why families with small children don't want to come visit.  The trips are overshadowed by changes in routine, "my kid doesn't usually act like this" and trying to find a peaceful path for all.

I need a vacation.

After writing this all out, I may punch that person in the face that thinks travelling with kids is fun.
OK, probably not.
Posted by Amanda at 9:02 PM No comments:

The Age of the Super-Mom

We all know THAT woman.  She is perfectly dressed and accessorized while her meticulous children play quietly and kindly.  Her house is spotless, her kids are academically-sound and she and her husband have a perfect marriage.  She volunteers, manages play dates, enrolls in activities and still manages to get her laundry and home-cooking done.  Who is this woman?

Heck if I know.
Why are we, as woman, obsessed with the concept of the "Super-Mom"?  It is physically impossible to have everything perfect all the time and who wants to anyway?  Perfect is boring.  But really, we continue to carry on so that things LOOK like we are in control...even if we aren't.


I have been called a "Super-Mom" a few times and besides finding it mildly offensive (it doesn't exactly have a positive connotation in my book), it is far from true.  Each one of my children has their own set of problems, issues and areas of concern and if you know me well, I don't cover it up.  And it surprises people.  Not because kids are far from adult-like status but because I am actually talking about it.  And that's the thing that surprises me the most:  Moms don't like to talk about the bad stuff.  It is a whole lot easier to share about Picky #2's reading conquests than the fact that Picky #3 gives me a daily dose of parenting humility.  Or that Picky #1 is an imaginative and beautiful artist but struggles with counting change.  But if you know me really well, you know that I share this information without defeat.  I also willingly share that my house is cluttered and disorganized while the laundry is taking up the floor of our bedroom.  But darn it if we don't eat good food at home.  ;)


As moms we tend to hide all this information in the junk drawer filled with coupons and old thank-you notes.  Yes, it is a lot easier to keep it to yourself and not expose the truths of everyday life but there are a million people out there who actually understand.  Moms who have been through it or know someone who has been through it...and survived!  All we have to do is open our mouths and share.  You might surprise yourself.


And guess what.  Sometimes our sweet little darling children can drive us crazy and that is OK, too.  But imagine the look on people's faces when I share that uncommon piece of information.


Let's kick "Super-Mom" and her image to the curb.  Instead I will embrace the "I'm doing-the-best-I-can-and-hopefully-not-raising-a-serial-killer" Mom status of imperfection, messiness and chaos.  Join me.

Posted by Amanda at 7:59 AM No comments:

Amanda
I am constantly inspired by food, my kids, relationships and environmentally-conscious people. I am a vegan in a meat-loving society, a liberal in a conservative town and a stay-at-home mom in a working woman's world. I am comfortable in my skin for the first time EVER. :)